Commissioner Smashes Barriers to Employment for People with Disabilities.

Community Options held the groundbreaking of its seventh entrepreneurial business, Just Add Water, on September 16, 2009. Just Add Water will be a café style tea shop with a conference training facility attached that will also offer catering for personal or business needs. With the generous support of the Department of Labor, this business will employ ten individuals with disabilities beginning in early 2010.

“Partnering with the Department of Labor to open this entrepreneurial business is ostensible proof of the vision and leadership of Commissioner David Socolow and his team,” said Robert Stack, President and CEO of Community Options. “This will prove to be one of the greatest achievements for improving the lives of New Jerseyans with disabilities in the next decade,” added Stack.

Department of Labor Commission David Socolow, who attended the groundbreaking ceremony, views Community Options’ businesses as a way for workers with disabilities to increase their participation in the work force. He notes that, “This is one of the most creative things we can do to ensure that people with disabilities have jobs.”

Just Add Water will not only provide job training to individuals with disabilities, it will foster their entrepreneurial spirit by providing additional trainings on creating, sustaining, and financing a small business. Individuals employed by Just Add Water will also be allowed to pursue ownership of the business through an innovative new program.

Stack says, “This was a labor of love. It represents the culmination of ten years of planning.”

“This is one of the most creative things we can do to ensure that people with disabilities have jobs,” Socolow said.

Suiting up for Success

The Men’s Wearhouse has partnered with Community Options through their National Suit Drive program to donate business suits to COI. The purpose is to obtain “gently-used” professional clothing to provide work-appropriate wardrobes to those looking to re-enter the work force. People can make donations at the Men’s Wearhouse locations in Vestal and Elmira, NY of any professional apparel from suits, dress shirts, sports coats, slacks, ties, and belts.

On October 2, 2009, the Mayor of Binghamton, Matthew Ryan, personally delivered a set of business clothing to the Binghamton COI office to celebrate this generous donation. A special segment aired on the Fox Forty News captured the event.

“We are so grateful to have been chosen by Men’s Wearhouse to be a beneficiary of their National Suit Drive,” says Paul Weckel, Executive Director of Community Options. “Everyone can use a boost in this current business climate and feeling good about what you are wearing when you go on a job interview can make all the difference,” he added.

The National Suit Drive has been a huge success and has been well received by the individuals we serve in the New York region. COI Binghamton received over forty suits which will continue to be distributed to those seeking new apparel for employment through the employment services we offer.

Dorothy Goodwin started her new position as Executive Director of Community Options South Carolina on March 30, 2009. Since then, she has already opened one home and continues to explore opportunities to offer Supported Living Placement (SLP I) supports to individuals desiring to live in the Midlands area.

Dorothy is a graduate of the University of South Carolina, where she earned her Bachelor’s of Science degree in Psychology. Furthermore, she also went on to graduate school at USC, studying Vocational Rehabilitation. Dorothy’s previous position was with the Babcock Center where she was an employee since 1980. Her multiple leadership roles included Director of Residential Services, Director of Special Projects and Quality Enhancement, and most recently, the Senior Director of Programs.

Community Options is thrilled to have Dorothy as the Executive Director of South Carolina and is excited by the extensive experience and leadership skills she has gained from her previous employment and is utilizing at COI. The South Carolina program continues to grow and develop as an important service to individuals with disabilities. Currently, Dorothy provides residential services for a total of 34 individuals and is beginning to implement employment services.

When asked about her experiences at Community Options, Dorothy says, “I feel fortunate to be a part of an organization that strives diligently to respect the choices and human rights of this special group of people we all are so privileged to support. I am appreciative to Robert Stack and Karen Hensley for the opportunity to be a part of the COI organization and to the many Executive Directors that have reached out to me, offering assistance to me as a new executive to Community Options.”

On Tuesday, September 29, 2009, Community Options Amarillo officially adopted the McDonald Lake Park. A ceremony was held at the park, which is located on 4901 Coulter Road in Amarillo.

Chandy Davis, Executive Director of the Amarillo Branch of Community Options, says, “We are thrilled to be adopting the McDonald Lake Park. The people we support take great pride in their community and this is a great manner in which to raise awareness about the wonderful work of the people we support and to get them more involved with the local community.”

The adoption of the McDonald Lake Park by Community Options will prove to be a valuable resource to the community as the park will be maintained by the organization and kept litter free on a daily basis. Individuals with disabilities will gain valuable volunteering experience at the park, while providing a much-needed service to community members who use the site. By arranging and supporting this volunteerism, Community Options Amarillo will use the park as an opportunity to integrate people with disabilities into their community.

COI will use 12 of our 26 offices to support families of children with disabilities to evaluate, promote, and provide national leadership training through a Family Web 2.0 project. Families will teach each other how to evaluate and operate training programs and how to engage in positive policy development to ensure ongoing support services. Family Web 2.0 means moving toward citizen-centric information, education, and resources that are truly usable and accessible.

The project will be based on the spirit and energy of the award winning Partners in Policy Making program and will combine strong grass roots advocacy, national and state resources, and state of the art communication and social networking technology to identify, evaluate, develop, and disseminate training materials that meet the expressed needs of families.

“This grant of national significance is the culmination of our team’s relentless efforts to improve the lives of children with disabilities and to empower families,” says Jessica Guberman, Executive Director of Community Options Enterprises. Community Options has already begun the initial steps to implement the project in New York, New Jersey, Pennsylvania, Connecticut, Tennessee, South Carolina, Kentucky, Texas, and New Mexico.

Goblins Dash to the Finish in Santa Fe

On October 31st, 2009 Community Options employees and residents of Santa Fe participated in our first “Goblin Dash” 5k run/walk. The event also brought out many local dignitaries including Santa Fe Mayor David Koss, representatives from Senator Jeff Bingaman’s and Senator Tom Udall’s offices and President and CEO of Community Options, Robert Stack. Keeping in the Halloween spirit, some participants dressed up in costumes, including a pumpkin and Tigger from Winnie the Pooh, as they competed. Many stated this 5k was well-timed, as the exercise helped to offset the Halloween candy they anticipated eating later in the day. 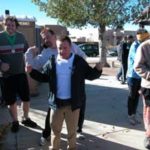 COI of Santa Fe was established in 2004 to provide residential and employment services to residents in Northeastern New Mexico. The Santa Fe office led by Executive Director Maralie Waterman-BeLonge currently serves 43 individuals. “Many thanks to the staff, volunteers, consumers, families, and sponsors who worked to make the event possible,” says Maralie of the event.

Opera singer Andre Solomon-Glover developed an international career singing a wide repertoire ranging from the roots of American song to opera, from Broadway to groundbreaking contemporary works. Mr. Solomon-Glover, whom critics have called “a remarkably communicative performer,” has made solo appearances in major halls throughout the United States and Europe; furthermore, he has also performed with renowned ensembles such as the Leipzig Gewandhaus and the Philadelphia Orchestra.

Unfortunately, tragedy struck Andre in 2002, when he suffered a stroke that resulted in a traumatic brain injury. Since this injury, Andre has had very few performances, drastically limiting his public appearances and involvement in the music scene. All of that changed, however, at 8 pm on October 17, 2009, when Andre took the stage at the Kaufman Center’s Merkin Concert Hall in Manhattan. This performance was incredibly meaningful to Andre, as he gained back a piece of his life that was lost after the injury.

Community Options takes great pride in Andre’s unbelievable story, as we have been providing him with support for the past two years. As part of our mission to provide assistance to people with traumatic brain injuries, COI has been helping Andre with various daily living skills in his own home, allowing him to regain control of his life after his injury. Impressively, Andre is also a recent graduate of RUSK Institute of Rehabilitation Medicine out of the New York University Langone Medical Center.

Robert Stack, who founded Community Options in 1989, says, “Disability is a very objective condition – it knows no boundaries relative to income, race, religion or political affiliation. Disabilities can happen to anyone at any time. We are thrilled for Andre that he is reclaiming his life and doing what he loves.”

Last year, the organization held the Cupid’s Chase at Princeton University and had over 600 participants. “This year, we anticipate having over 1,000 participants at the new location at the Princeton Shopping Center and over 150 participants in each city throughout the country,” says Robert Stack, President and CEO of Community Options.

This Valentine’s Day-themed event will feature a 5k certified course with an official timekeeper and group registration rates, entertainment and refreshments for runners and their family and friends, and raffles for romantic weekends and Valentine’s Day flowers. Although the race is competitive, participants will also be encouraged to enjoy the spirit of the event, and will be offered a choice to wear “available” or “not available” t-shirts. Furthermore, the Cupid’s Chase 5k will offer massages prior to and after the 5k by local massage therapists and chiropractors, along with prizes and other romantically themed giveaways to celebrate the day.

This event will raise awareness of Community Options, Inc. and its mission while acting as a national fundraiser. Because we keep our administrative costs remarkably low, 88-90 cents of every dollar raised will go directly to support for those with disabilities. To stay updated on the development of the national 5k event, please visit www.comop.org/cupidschase