Community Options Inc. will celebrate 30 years with gala May 9 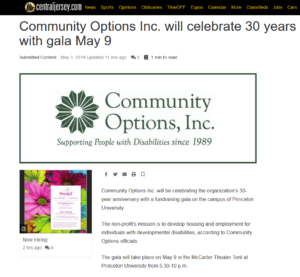 Community Options Inc. will be celebrating the organization’s 30-year anniversary with a fundraising gala on the campus of Princeton University.

The non-profit’s mission is to develop housing and employment for individuals with developmental disabilities, according to Community Options officials.

The gala will take place on May 9 in the McCarter Theater Tent at Princeton University from 5:30-10 p.m.

“Forty years ago, New Jersey had over 8,000 people with disabilities segregated in large, congregate institutions like the North Princeton Developmental Center, which originally opened as the New Jersey State Village for Epileptics. The large institution warehoused persons on the significant end of the spectrum with autism, intellectual disabilities cerebral palsy and also epilepsy, ” said Robert Stack, President and CEO of Community Options.

He said since the non-profits establishment in 1989 the organization has helped individuals who had been placed in those institutions for their disabilities.

“We were able to place people who were inappropriately left in these large institutions and purchase small homes, hire staff and help them obtain jobs or meaningful programs and return them to their local communities.” said Stack.

“We are asked to expand because our services are individualized backed with low administrative costs and well-trained staff.” said Stack.

Community Options has a staff of more than 5,600 people that support thousands of people with disabilities, according to Stack.

He said the organization is excited about their newest flower store on Witherspoon street in Princeton.

The new flower store will open next month. Their first shop was opened in Edison several years ago, according to officials.

“We also own and operate The Daily Plan which are office complexes rented to entrepreneurs staffed by persons with disabilities,” Park said.

Stack said he wants parents to know that they are not alone.

“There are agencies like ours and others to support their child regardless of the severity of their disabilities. We have a strong national infrastructure, but our expertise is developing and providing strong services for the person to live in a beautiful home and have a job they enjoy,” said Stack

For more information about the gala, please contact Kimberly Schleyer at Kimberly.Schleyer@comop.org or call 609-951-9900