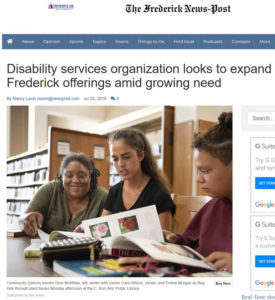 Cami Wilson’s eyes lit up as she gushed about makeup.

She’d like to turn that passion into a profession, she told Megan Toomer as they chatted Monday. Wilson’s sparkling eyes and wide smile were a marked contrast from her demeanor the first time she met Toomer.

“It took you half an hour before you even said ‘hi’ to me,” Toomer told Wilson, recalling their initial encounter.

“I was really shy,” said Wilson, 27. She credited the day program for teaching her social skills and helping her make friends, something she’d struggled with in the past, she said.

Community Options came to Frederick last summer, starting with the day program followed by two houses that offer residential services for seven adults, according to Toomer. The organization plans to add a third site to its residential program at the end of the month, and expand its daytime program to 20 people by the end of the summer.

“As the families who might be caretakers age, they need places to send their now-adult children, to give them something to do during the day, and in some cases, a place for them to live,” Herndon said.

Maryland public schools provide daytime care and support for families with children with disabilities. Once they turn 21, however, disabled residents must qualify for a waiver program through the Maryland Developmental Disabilities Administration (DDA) to receive funding for in-home caregivers, employment services and other support.

Lengthy waiting lists have plagued the administration’s waiver programs in recent years, though the wait was lessened substantially when the DDA received the go-ahead to grant 800 more waivers at the end of 2017.

Even among those who have one of the coveted waivers, though, finding meaningful opportunities for social interaction and skills training can be hard, especially in Frederick with its vast geography and little public transportation, according to Lisa Tate, associate executive director for Community Options’ Frederick program.

Daytime programming for children with disabilities transitioning from school to adulthood topped the list of needs for Frederick-area disabilities services, according to Michael Planz, CEO of Community Living, which also offers residential, vocational and support services for adults with disabilities in Frederick.

Though Planz acknowledged that Community Options was in some sense a competitor with his organization, he also spoke of the benefits of having options and services for residents to choose from.

And need far surpassed the service a single organization could fill, with Planz estimating that 80 students with disabilities had graduated in the spring and were now seeking daytime programming.

Such was the case for Wilson, who found herself often alone in her Frederick apartment, save for the company of the live-in aide provided through her state waiver. She moved out of her parents’ house to become more independent, but found that independence also came with loneliness and an overwhelmingly empty schedule, she said.

She listed off the array of activities she’d participated in since starting in the day program, naming a paddle boating excursion as her favorite. And despite her shyness, she’d made fast friends with fellow client Emma Morgan, 25.

The pair sat side by side in the C. Burr Artz Public Library in Frederick on Monday afternoon, flipping through books about gardening and plant life as the part of the week’s nature theme. Much of the program centers on community incorporation, as emphasized through the DDA’s Community Pathways Waiver program, Tate said.

“I find that people in general tend to be a lot more receptive to learning new skills when it’s blended in with fun,” Toomer said.

The nature week theme, for example, might incorporate group discussion about how to dress for different outings and weather. For Wilson specifically, Toomer was working on boundaries: when it was appropriate to display her newfound outgoing personality versus when to hold back.

For Morgan, who has an intellectual disability as well as a mental illness, Toomer is coaching her on budgeting and finding a more permanent place to live; Morgan said she was staying in a tent right now.

Neither Morgan nor Wilson lives in one of Community Options’ homes, though some of the daytime program participants do, Tate said.

Community Options also has programs in Howard County and Rockville, and plans to expand into Baltimore and the Eastern Shore, Herndon said.