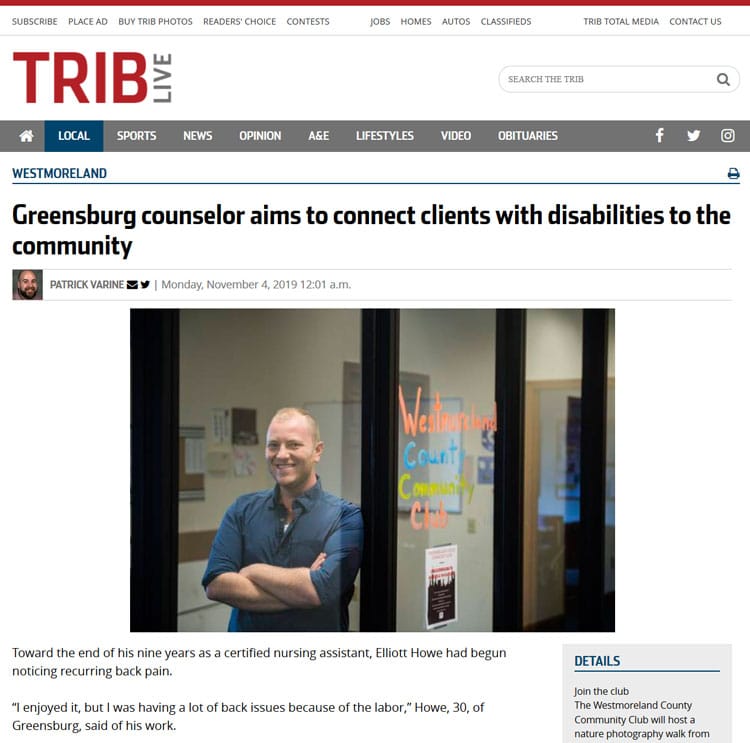 Toward the end of his nine years as a certified nursing assistant, Elliott Howe had begun noticing recurring back pain.

“I enjoyed it, but I was having a lot of back issues because of the labor,” Howe, 30, of Greensburg, said of his work.

About the same time, two of Howe’s nephews were diagnosed with autism. Looking to make a change, he found a position as a senior community integration counselor with Community Options in Hempfield. The social service nonprofit works with people affected by disabilities through residential services, day programs, social enterprises that employ individuals with disabilities, high school transition programs and specialized programs for respite and medically fragile adults.

“My main thing was to find out more about how to help my nephews when they get older,” Howe said. “I see my sisters struggling and never had a real sense of all the work they did.”

Howe was also interested in connecting individuals with disabilities to the greater community, which led him to form the Westmoreland County Community Club in April.

“Part of my job is looking for events for clients to attend,” he said. “We’re a daytime operation, 8 a.m. to 4 p.m., and it’s tough to find events then because most people are at work.”

Howe talked with his supervisor, “and I said, ‘Why don’t we just make the events?’”

The club kicked things off with an Earth Day cleanup event.

“I had a few people come, but it really sparked an interest in publicizing what we’re trying to do,” Howe said.

Below, Howe discusses the formation of the club.

Howe’s older sister, Leah Adams of Greensburg, said she can see her brother’s desire to help others reflected in his interactions with her 12-year-old son Jacob, who is on the autism spectrum.

“Elliott’s really taken some initiative with him,” Adams said. “Since he’s on the spectrum, he doesn’t make friends easily. But for a long time, every single week his uncle would take him to the mall or to Twin Lakes where they’d walk around and play Pokemon Go on their phones.

“I don’t know if (Pokemon) was something Elliott was into or not, but he would do it every single week,” she said.

Howe’s helpfulness is a trait Adams remembers from their younger days.

“Even when we were little, around the holidays he would always be helping out around the house,” she said. “Even now, I have three kids and he doesn’t have any, but he’ll stop by and ask, ‘What do you need me to do?’”

That initiative has served him well in developing the Community Club. An “Art in the Park” event in July at Twin Lakes Park was well-attended, and now Howe is seeking to make some partnerships throughout the county.

“I’m getting different people calling for suggestions,” he said. “I got a call about maybe starting a caroling group for Christmas.”

What is important is that the events are offered at no cost and that they bring together Community Options clients and the general public.

“We want (our clients) to have experiences like everyone else,” Howe said. “The whole world has sort of changed and learned acceptance for all types of people.”

Howe has done weekly walking groups and a yoga event and would like to establish regular events such as a monthly board game day.

For now, he is focused mainly on organizing the club.

“We’re a nonprofit, so we’re utilizing what we can and building from there,” he said.