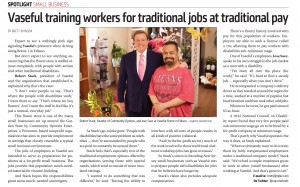 Expect to see a striking pink sign signaling Vaseful’s presence when driving along Route 1 in Edison.

But don’t expect to see anything announcing that the flower store is staffed almost completely with people with autism and other intellectual disabilities.

Robert Stack, president of Vaseful and the organization that established it, explained why that’s the case:

This flower store is one of the many small businesses set up around the Garden State by Community Options Enterprises, a Princeton-based nonprofit organization that aims to provide employment in settings that closely resemble a typical small business environment.

The jobs of employees at Vaseful are intended to serve as preparation for positions at a for-profit small business. The jobs provide this population much-needed material for resume-building.

And Stack hopes the responsibilities grant some much-needed sovereignty.

As Stack’s go-to-joke goes: “People with disabilities have the same problem as celebrities – they’re surrounded by people who are paid to constantly be around them.”

Stack feels that’s especially true of the traditional employment options offered by organizations serving those with special needs, which tend to consist of more insulated settings.

“I wanted to do something that was different,” he said. “Having the ability to interface with all sorts of people results in all kinds of positive collateral.

“And (in the for-profit sector), much of the work involved in those traditional sheltered workshop jobs has gone overseas.”

There’s a thorny history involved with pay for this population of workers. Employers are able to seek a license called a 14c, allowing to pay workers with disabilities sub-minimum wage.

One of Vaseful’s employees, Jose Saez, spoke to his own struggle in the job market as a man with a disability.

“I’ve been all over the place (for work),” he said. “It’s hard to find a steady job…especially when you don’t drive.”

He accompanied a company’s delivery driver as they traveled around the region for a time, worked at a number of popular fast food locations and then took other odd jobs.

Wherever he went, he got paid around $5 an hour.

A 2012 National Council on Disability report found that very few people paid sub-minimum wage go on to be hired by a for-profit company at minimum wage.

That’s partly why Vaseful operates the way it does, as Stack Explained.

“What we ultimately want to do is train them for fairly compensated employment under a traditional company model,” Stack said. “We’ve had a couple employees go on to work at other (small businesses) after working at Vaseful. And that’s great to see.”